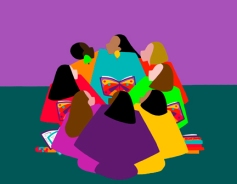 As a lifelong church girl, most of spiritual experiences have taken place within the confines of a traditional sanctuary. As I became older and began to see God in different ways, I learned that I could create a space for God to dwell whenever and with whomever I choose. I discovered the power and the joy of creating my own unique hub for God with the fellow congregants of Sanctuary 3B at 1703.

Sanctuary 3B began as a lunch club with me and several of my co-workers at my former job. We were right at the beginning of The Great Recession and my co-worker Adriane suggested that we could have one person make lunch every Wednesday to help all of us save our lunch money.  We developed a very detailed Excel spread sheet for the newly dubbed “Lunch Bunch” which included dates for lunch duty, recipes, and food allergies and preferences (although some people’s food peccadillos were more extensive than others *cough Tina and Alseta cough*). Amazingly, we worked around these demands, I mean preferences, and each week we met for lunch in Team Room 3B for a new culinary delight.

What began as a simple lunch hour to break bread and save dough quickly grew into a healing hub for alleviating our work woes, sharing our domestic challenges, getting advice on our men, and gabbing about current events. If you walked past Team Room 3B on a Wednesday afternoon, you could pretty much guarantee that you would hear 60 minutes of laugher, joy, and occasionally loud outbursts. As our workloads and challenges grew, we began meeting in Team Room 3B beyond just our lunch hour. If we walked up to each other’s cubes with a particularly stank mug or attitude, the calmer of the two would simply point toward the team room and would talk the other off the ledge before the offender went crazy on a supervisor or took a challenge home to a spouse or child.  There were more than a few days when I held it together just long enough to make it into the room and dissolve into a puddle of tears with one of my fellow congregants. It was at that point that I began thinking of Team Room 3B as Sanctuary 3B.

Some of the best times in Sanctuary 3B included watching post-election commentary the morning after President Obama’s first election; discovering our dear Daniela’s affinity for shopping at REI; trying to find strategies to help Jess to convince her then soon-to-be husband not to climb a major mountain two weeks before their wedding; celebrating Adriane’s pregnancy with our beloved Addison (and having to pull her into the Team Room on more than one occasion when her hormones made her legendary straight face even straighter!); and Ana’s classic advice on performing a certain “wifely duty” which literally made me fall out of my chair and lay prostrate on the Sanctuary floor.

Occasionally we invited visitors to join us at Sanctuary 3B. One particular visitor, Charwin, was so excited when he got his invitation to join us for Lunch Bunch that he made us an delicious, authentic Liberian meal and brought in real china for us to enjoy our meal. During my last meal with the Lunch Bunch, the sisters graciously put together an unforgettable meal for me on our outside terrace to celebrate my journey to my current job. We invited our meeting planner extraordinaire Jackie to join us for a meal that I now call “The Tent Revival with Evangelist Jackie.” I remember one of us asking Jackie to pray over the food before we began our meal. Honey, let me tell you she prayed for the food, my new job, peace for those of us remaining at 1703, peace in our homes, peace for our nation, and everything in between. I remember slipping in a “Thank you Jesus” during that prayer. Not only were we ready to eat, but Jackie gave us a prayer to help us run on just a little while longer.

Most of the congregants from Sanctuary 3B have since moved on from 1703 but that hasn’t stopped us from meeting together for an occasional service at a satellite location. During the height of Sanctuary 3B’s meetings, I was going through one of the toughest emotional patches in my career. But I KNOW that my time at the Sanctuary gave me the strength to keep moving until I saw my way clear. And I know I wasn’t the only one who received solace from our hallowed ground. We prayed for sick family members together. We blessed new babies together. We gave each other career advice. We helped sort out thorny spousal issues and dates gone wrong. We were more than just a group of women who like to come together and grub. We were a group of women who gathered our collective strength to become better professionals, better wives and mothers, and better citizens of this world.

I definitely believe that our churches, synagogues, and mosques have a place in our communities. But if you don’t have a formal worship routine, I hope that you will be as blessed as I was to find the living, breathing representation of God’s love here on earth in a house of worship as awesome as Sanctuary 3B.